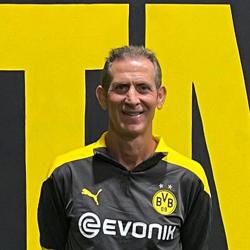 Please join with our club in congratulating Nick Stavrou to the newly appointed role of Director of our Boys ECNL program. Nick joined the club a year ago as an elite Boys ECNL coach.  Throughout the past year we have grown to admire and respect Nick’s coaching ability as well as his ability to manage and overcome challenges.  In addition, Nick has shown himself to be a leader amongst his peers and more than willing to pitch in when and where the club needs him.

Nick is a UEFA “B” licensed coach who will be completing his USSF “A” license within the next 12-18 months.  Nick has coached at the highest levels of the youth soccer game as well as at the semi-professional and professional level.  Nick also played as a professional player and has resided in the Dallas area for the past 20 years.

Nick was a Division I All-American while attending Cleveland State University and was captain of the Dallas Sidekicks.

On behalf of all of us at BVB IA Texas we congratulate Nick on this new opportunity and wish him all the best.