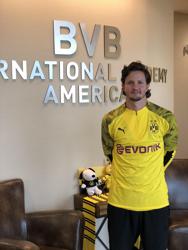 Cameron’s decision to join BVB was summarized in the following statement.  “BVB is really something special.  The amount of support that has been shown for my players, my teams, our families, and our coaches has been amazing. The coaches within the club already are great people and have so much respect for each other which is not the case in other clubs.  I am excited to be a part of the Black and Yellow family and excited for the future for my players and families.  I believe in this club. Echte Liebe!”

Cameron is from Garland, Texas and played for Solar Soccer Club in his youth career winning a USYSA National Championship in 2008. Cameron was named to the U.S. Youth National Team from U14-U20 and member of the FIFA U17 World Cup roster in 2005 and FIFA U20 World Cup roster in 2007. Cameron attended Naaman Forest High School from 2003-2007. After High School, he attended the University of North Carolina at Chapel Hill in a full athletic scholarship and won the NCAA D1 Men's National Championship in 2011.

Cameron then began his professional career when he was drafted to FC Dallas in the 3rd round of the MLS Superdraft in 2013. He signed for the Dallas Sidekicks Professional Indoor Soccer Team in 2014 and still plays professional indoor soccer today. Capped twice for the U.S.A. Arena National Team in 2016 he began coaching in 2016 and continues as a full-time youth coach as well as playing professionally. Proud to be home again, involved in the community and married to his wife Tori since 2013, Cameron and Tori have 4 amazing children.

Cameron joins the BVB International Black and Yellow family with four teams including the 02 Boys, 08 Boys, 09 Boys and 2011 boys.  Cameron will be part of the NPL staff as both the 02 and 2008 boys’ teams will compete in the National Premier League.  Cameron is passionate about the community, the families and his players and is eager to rebuild the talented soccer “family” as the BVB International Texas East region.

Peter Brody enthusiastically welcomed Cameron and the coaches by saying, “Cameron and the rest of the staff in the Wylie area possess that unique passion for their players and families that you immediately know success is in the future.  Our aligned values of character combined with intensity provide an authentic and honest BVB experience was immediately evident.  We are genuinely excited about the future and looking forward to building BVB in the Wylie area and surrounding communities.”