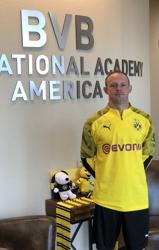 Effective immediately, BVB International Academy Texas proudly welcomes coach Aaron Proctor and his teams to the club.  Aaron Proctor played competitive soccer locally for several years in the Chamber Classic League throughout his club career and reached heights as far as playing in Dallas Cup and later walking on at East Central College.   After completing his playing career, he began coaching several sports recreationally and currently holds a USSF National D License, SafeSport Certification, and is continuing to better himself through educational and coaching courses.  He is a father of four wonderful children and enjoys getting outside with his German shepherds and family whenever he is not on the field or working. Aaron added, “I am excited to be a part of the structure and framework BVB International Academy has built for my incoming families.  I am humbled to help the club instill passion for the game through BVB core values through coaching my groups, The BVB Way.”

Aaron will take on the additional role of Regional Coordinator for the Colleyville area working strategically to build and grow the Colleyville region into a strong soccer community ensuring players have both development opportunities and player experience on and off the field they deserve as part of the BVB International Academy-Texas.

BVB International Academy America, President and Chief Executive Officer Peter Brody remarked, “We are fortunate to have a coach of Aaron’s integrity, background and coaching ability joining our club.  Aaron brings with him a firm understanding of the impact a coach can make on his players and embraces the responsibilities with confidence and most importantly a fantastic plan.  We look forward to many years ahead with Aaron as big part of what continues to make our club one of the best clubs in the state where players can develop, exceed even their own expectations and find success both on and off the field.”